Refs are finally explaining why a crucial call in the Chargers-Chiefs game was overturned, and Chargers fans are still not happy with the decision.

During the Thursday night game between the Chargers and Chiefs, Chargers corner Asante Samuel batted the ball to himself and appeared to catch it as it was landing but the interception call was overturned during a replay review.

Chargers fans felt Samuel has both hands underneath the ball and should have been awarded the interception.

This is an Interception! Chiefs scored on this drive man#KCvsLAC | #Chargers pic.twitter.com/jTUZ66A6DT

The refs claim the ball hit the ground while Samuel was going down and that he did not maintain control. 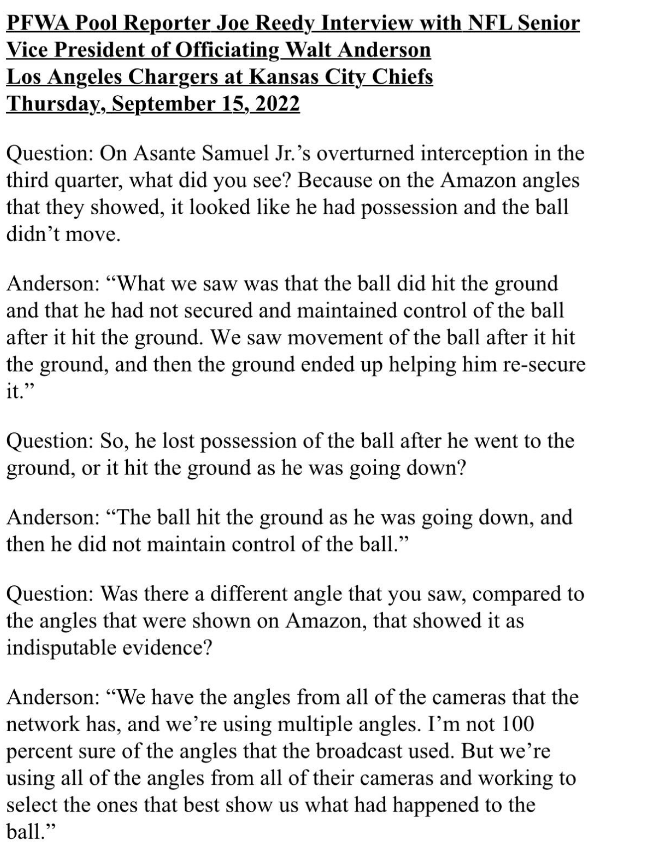 Chargers fans weren’t buying the ref’s explanation and went off on social media.

Translation: Mahomes threw it and we are going to help him out whenever we can. https://t.co/XMLkShLoKd

Awful call it was a clear interception https://t.co/mPA8kTOsvZ

Hearing explanations make me more mad than not hearing them sometimes. https://t.co/UIPxBQgPsj

Refs lying to the public now. You know damn well that ball didn’t hit the ground and if it did he had full control of it. Capping for mahomes https://t.co/GrhafJoubJ